StageRight’s new all aluminum Sentinel Crowd Control Barricade is now available in the marketplace. This product is extremely light weight, while still being one of the strongest stage barricades on the market today. It’s built for the rigors of concerts and extreme crowd control applications. A multitude of safety and performance features are also integrated into the design.

The feature of the barricade includes the rounded tops for the security staff to easily lean over and pull the patrons to safety. A tapered floor plate helps prevent trip hazards when the crowd moves with the event.  The floor plate also has a slip resistant perforated surface which makes safer to walk on and easier to clean because liquids will pass right through.

There’s a built-in step on the back of each unit, as seen in the image below, to give better access to security team members to help pull patron from the crowd when they are in trouble. 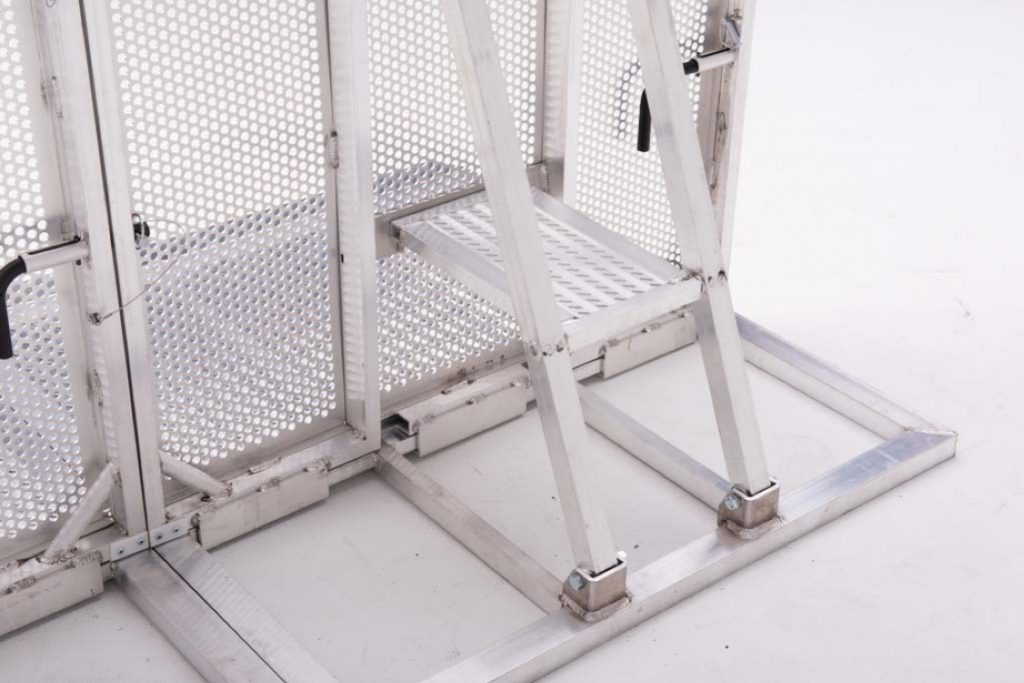 The final integrated safety feature is the aluminum mesh wall which allows lights, smoke, and sound to pass through unhindered as well as provide better visibility for both fans and security.

Weighing only 90 pounds, it’s much lighter than similar steel barricades which makes it extremely mobile. It can also be transported in a box truck instead of a semi because each unit is only 42 inches wide.

This barricade is ideal for many facilities and applications. Rental and production companies will need to have this in their inventory. Venues that host concerts or other large events on a regular basis will appreciate how easy it is to move these units in and out of storage.

Currently, the largest and most well-known facility that’s using the Sentinel Crowd Control Barricade is Fiserv Forum. Click the link to learn more about the venue. Fiserv Forum is an arena in Milwaukee that opened in 2018 after first breaking ground in 2016. It replaced the Bradley Center as the home of the NBA’s Milwaukee Bucks and the NCAA’s Marquette Golden Eagles. In addition to being the home of these two basketball teams, it hosts many concerts throughout the year. These concerts are typically where the barricade is being used.

Over the years, the Sentinel Crowd Control Barricade will be used a lot so it’s a good thing that it’s built to stand up to the wear and tear of such a busy venue like this.

If you’re a facility that hosts concerts or other events that require a crowd control application, please consider this product. Its aluminum build makes it lightweight enough to move easily while being strong enough to stand up to even the toughest crowds. The myriad of built-in safety and performance features keep fans safer and make the job easier for the security members and set up crew.