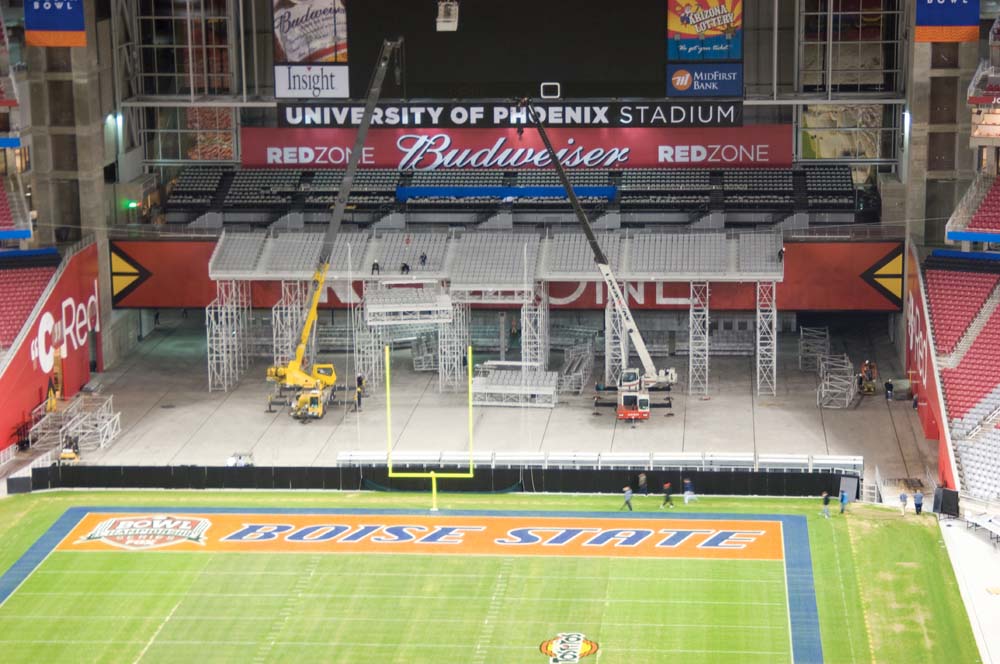 Flexibility is the key to profitability for facilities around the world. Many venues host multiple types of events, from sports to concerts and everything in between, so they require the flexibility to do so. This is the story about one stadium’s unique solution to provide a quality experience for the athletes, performers, and patrons while allowing the venue to be used for any type of event, and how we were able to contribute to making it a success.

To begin, did you know that the grass for the field at University of Phoenix Stadium is grown outside? Opening in 2006, this incredible engineering feat has been featured by news outlets throughout the country. As seen in the image above, the field rolls out through a large door once the seating risers are removed thanks to thirteen railroad-like tracks and 546 steel wheels. The entire process is started with just the pull of a level.

This stadium was the first in the United States to feature a fully retractable grass playing surface and it’s the only indoor NFL stadium to have real grass instead of artificial turf. While the facility does feature a retractable roof, it wouldn’t allow enough sunlight to grow indoors.

The ability to roll the playing surface outdoors allows transitions for concerts and other events to be easier because it rolls away on a big pallet system and doesn’t need to be manually removed as it would with artificial turf like other indoor stadiums in big heavy rolls. Even in outdoor stadiums that feature real grass, concerts can damage the field if the proper precautions aren’t taken. This flexibility benefits the facility itself and everyone involved in the conversion process for different events. In the long run it will help them save money, too. 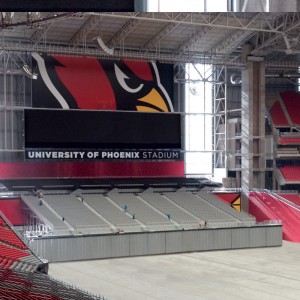 We are fortunate enough to say that we were able to play a small part in making this possible because of the need for a large-scale seating system that could be quickly set up and torn down with ease so that they could roll the field through. Traditional, built-in stadium seating wouldn’t work because there wouldn’t be a way to roll the field under it. It needed to be demountable, portable equipment. The solution was our Extravaganza Seating Risers. This system allowed us to help solve two problems for the facility.  The first was it allowed them to host large college bowls as well as the Super Bowl in 2008 and 2015 by meeting the required seat counts necessary to support those events since their built-in seating alone wouldn’t meet the requirements.  In addition, this allowed them to maintain the ability to grow the grass outside. The conversion takes under eight hours which is actually less than what they were hoping for.

All over the world there are remarkable things happening in different arenas and stadiums, as well as in smaller venues, and we get to be part of it.

Part of the reason why some of these remarkable changes are happening in arenas and stadiums is because of how the events industry as a whole is changing. The expectation of the patron experience is continuing to evolve and more flexibility means more profitability for venues, as we mentioned earlier. This relates directly to University of Phoenix Stadium as well. To learn more about how the major events industry is changing, check out our article about it.

Get tips to make your events better. Subscribe here: