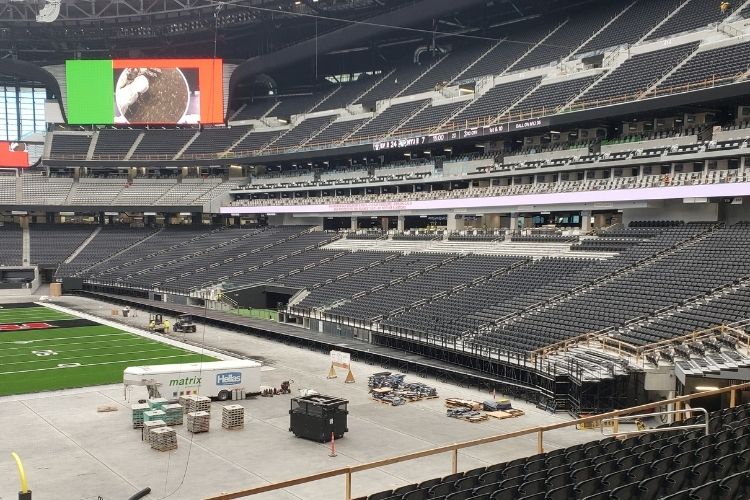 Allegiant Stadium is a brand-new venue in Las Vegas, Nevada. Opening just a couple of months ago in July of 2020, it’s home to the NFL’s Las Vegas Raiders and the NCAA’s UNLV Rebels football team, among many of the other events that Vegas has to offer like concerts and conferences.

Construction broke ground in late 2017 so it was an almost 2.5 year journey to get to where we are today.

Allegiant Stadium is extremely unique in that it has two levels of playing fields for football. One level is 48” below the other. The reason for this is because the Raiders play on grass and UNLV plays on artificial turf. The Raider’s field is the upper field and it has the ability to move out of the stadium in its entirety from one end of the stadium so that the grass can get sunlight. When the Raiders’ field is in place, sideline infill platforms are needed to fill in the wide gap between the field and the precast seating.

The feature that was most important to them during this buying process was the change-over time to switch out the field from one level to the other. The sideline infill platforms needed to be able to install and remove quickly while being able to store compactly given the limited storage area available.

Equally important was the rigidity of the structures since the sideline infills would need to support mobile camera units as well as players and the coaching staff. There could not be any bounce or flexibility in the system.

Our palletized deck structures with bridging capability provided the ideal solution. The system is rock-solid to provide a firm surface for mobile camera eliminating any “bounce” while simultaneously providing a permanent feel for players and coaching staff. It’s able to be installed and removed in the required time and stores efficiently adjacent to the field because the bridging capability reduces the number of supports needed which means there’s less equipment to handle. 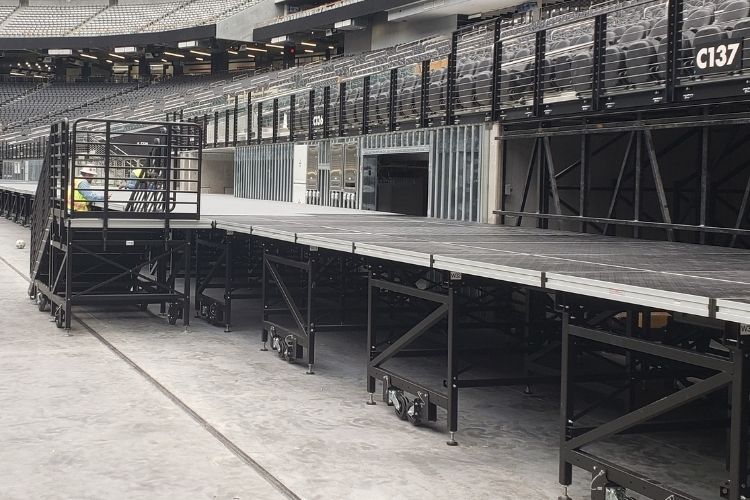 The installation for this project went smoothly and we were able to complete our portion of it well ahead of schedule. Our time on site was seamless.

Now that the system has been in place for a few months, the team at Allegiant Stadium is very pleased with the solution we provided. It has exceeded their expectations in speed, performance, and storage. As we continue to move forward, they will be able to use it more and more.

We’d like to thank the entire team at Allegiant Stadium for allowing us to be a part of this incredible facility!

Get tips to make your events better. Subscribe here: